History Scotland – The History of the Peoples Palace

The excellent article in April’s edition  of History Scotland’s online magazine is reprinted below.  It is well worth a read providing a detailed history of the People’s Palace & Winter Gardens. “The Friends of the People’s Palace, Winter Gardens and Glasgow Green explain the importance of saving these well-loved historic sites for current and future generations.

The People’s Palace Museum and Winter Gardens, which has served as Glasgow’s social history museum since 1944 is at present only partially open to the public, and has had no investment for the last 20 years. The Friends of the People’s Palace, Winter Gardens and Glasgow Green were formed in response to the closure of the Winter Gardens when the 20-year life span of its glazing mastic ended on 31 December 2018, resulting in the loss of access to the shared facilities of the Café, toilets and fire escape, as well as the life-giving glories of the Gardens themselves. 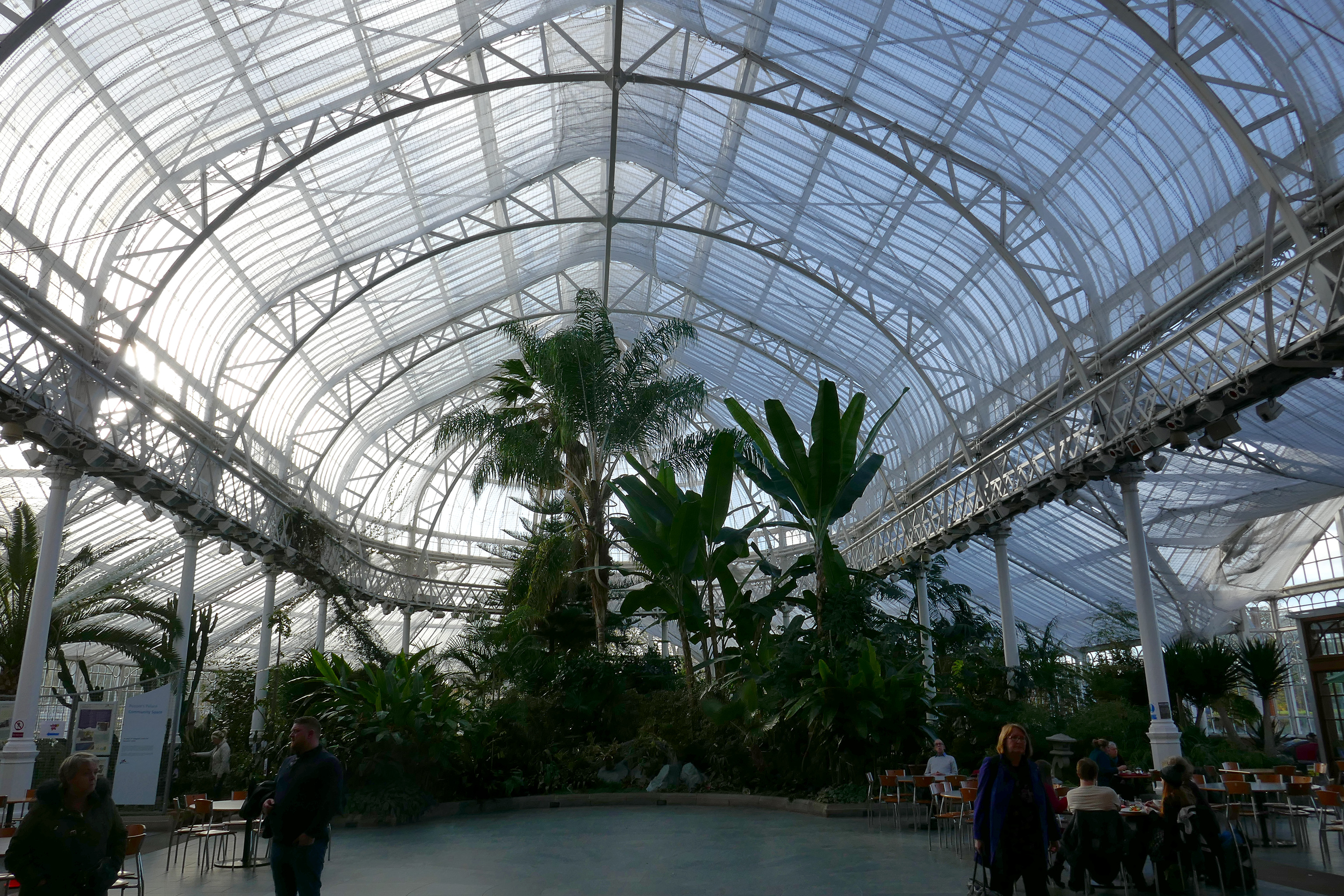 History of the People’s Palace

The People’s Palace, consisting of museum, reading rooms and winter gardens also serving as a hall for music, was designed to serve the working class people of the east end of Glasgow, built on Glasgow Green and first opened to the public on 22 January 1898. It is a unique institution built on Scotland’s oldest public park. Since the mid-1960s, the future and the very survival of the museum and winter gardens has been brought into question at regular intervals by local authority politicians of all parties. 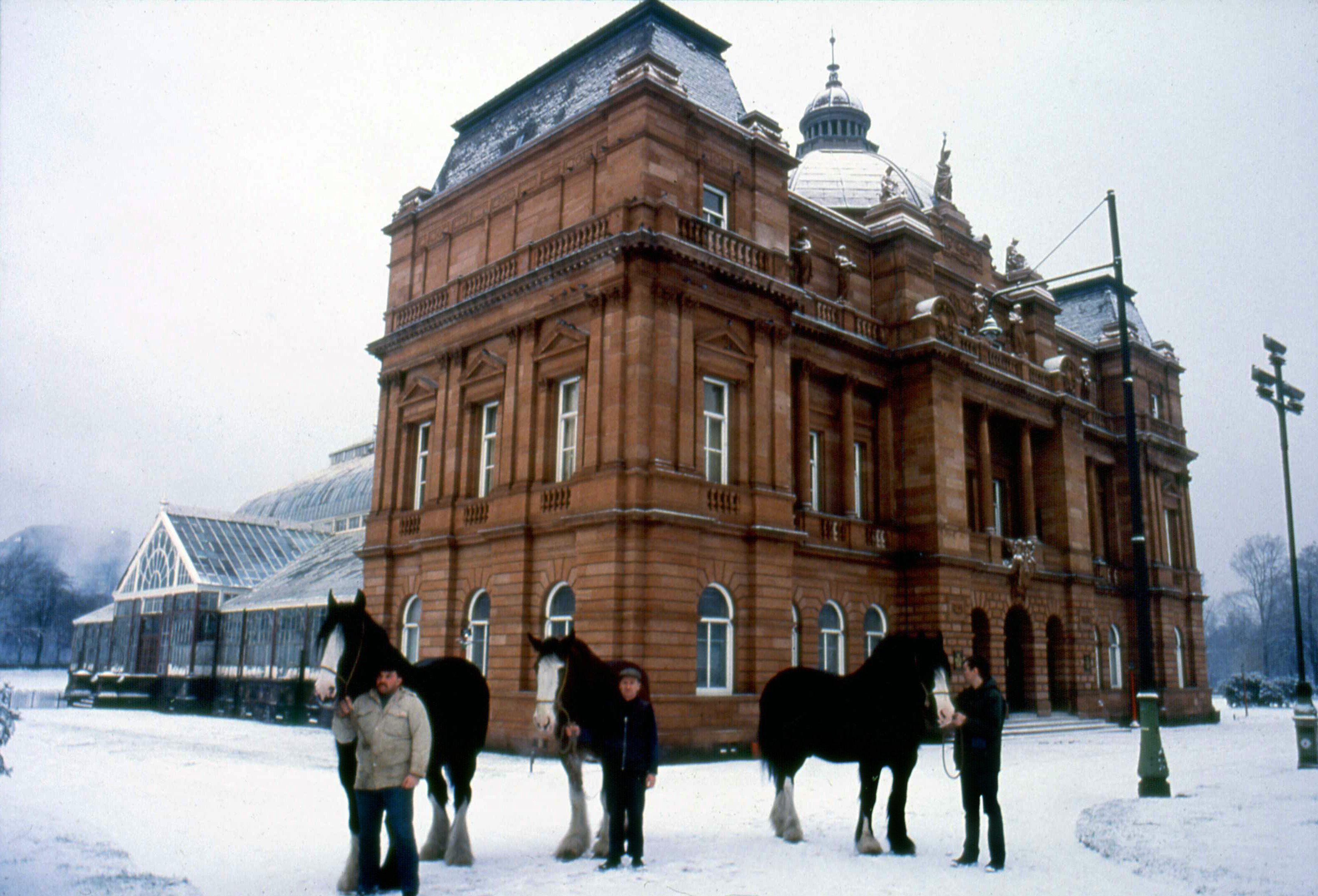 The location of the People’s Palace on Glasgow Green is as important as the museum itself. Glasgow Green is even more contested than the People’s Palace. It has been the common grazing ground, bleaching green, meeting, recreation and protest space for the city for over six centuries. Encroachments on the Green, ranging from coal mining to motorway building, have always been strongly resisted. Regular attempts at building on the Green, ranging from a theatre in the 1840s to a hotel in 1990, have always been strongly opposed. The People’s Palace has been the only permitted building, by public assent.

The roles of Glasgow Green

The politics of the time created and have always affected the institution and its collections. Glasgow Green was the terminus for all of the great Reform and Franchise demonstrations of the 19th century and the birth place of Scottish democracy. Each reform achieved was a triumph for the ruling Liberal Party and the People’s Palace was a place-marker for that achievement.

Franchise banners which saw service in 1832, 1867 and 1884 were gifted to the collection. Symbolic items carried in the various Franchise demonstrations: beehives of industry, a model potter’s kiln stuffed with burning rags to “Smoke out the House of Lords!” were among early gifts to the collection. When marking the 21st anniversary of the Representation of the People Act in 1949, former Suffragettes – who had demonstrated on Glasgow Green – decided that the People’s Palace was the place for their memorabilia. 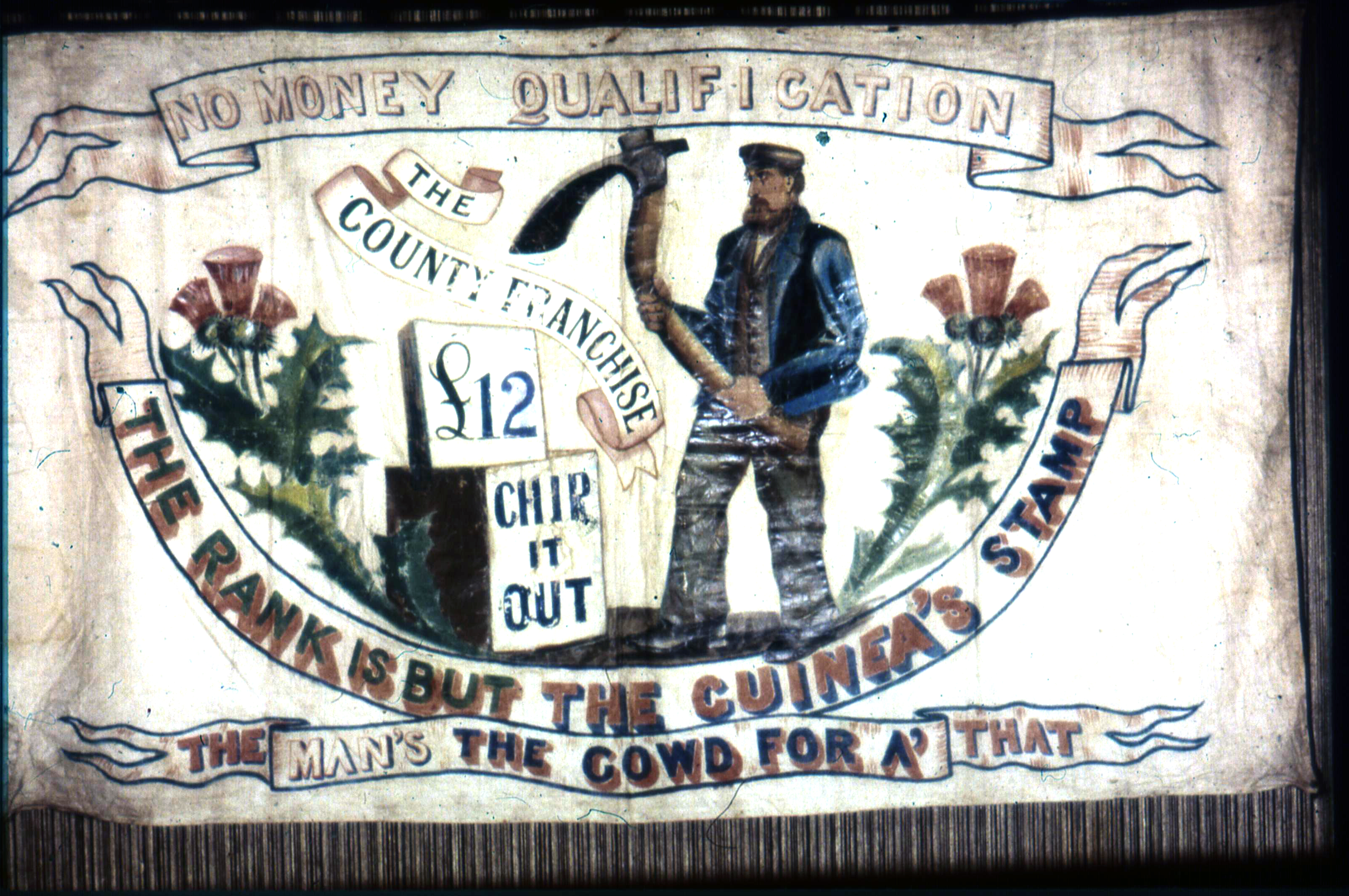 A history of the demonstrations on Glasgow Green is also an important aspect of Scotland’s political and cultural history. The Green’s radical history can be explored here. When the Fife to Glasgow Miner’s March took place in 1985, their banner was acquired for the museum collections at the end of the march, on Glasgow Green. When the great Black Lives Matter march took place in 2020, sadly, the curatorship of the People’s Palace was so dormant that politicians wrote to Glasgow Life, the body which runs Glasgow Museums, to request that some of the placards be collected.

To contextualise the diverse collection relating to political reform and worker’s rights, a major mural was commissioned in 1987 from the–then very young artist Ken Currie for the dome of the People’s Palace. In eight large canvases, the Glasgow History Mural gives a summarised depiction of 200 years of struggle from the strike of the Calton Weavers in 1787 to 1987, when the last canvas shows a group studying the objects in the People’s Palace, with the aid of oral history to shine light on the past whilst unfurling the banners of the future. The Palace, its collections and Glasgow Green are inseparable.

Some people mistakenly think that because the complex was built for the working classes, that only working class history is covered. Nothing could be further from the truth. The People’s Palace has an outstanding collection of about 200 panels of Glasgow stained glass, all of it designed and made in Glasgow, and rescued from demolition sites. The 1981 exhibition, Glasgow Stained Glass won the European Museum of the Year Award and a pdf of the publication, together with one on Glasgow decorative tile work can be read on History Scotland. 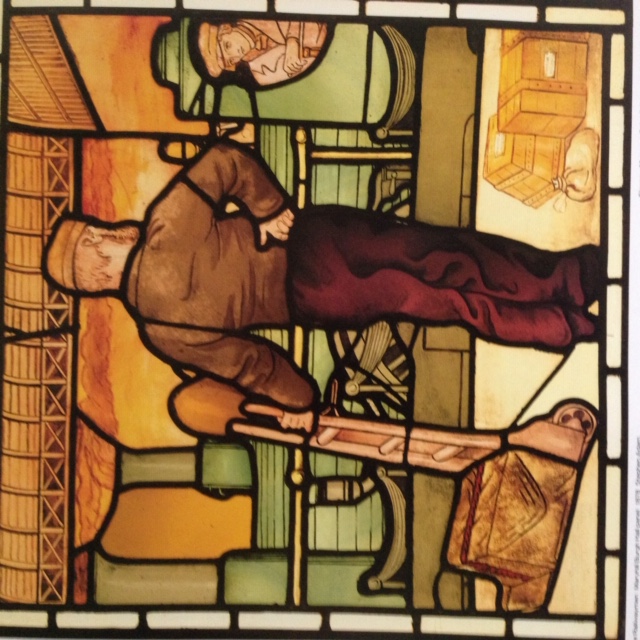 Railwayman, by Stephen Adam (1848-1910). One of a series of panels for Maryhill Burgh Halls

The People’s Palace also commissioned a significant body of work from the artist Alasdair Gray (1934-2019) whose Continuous Glasgow Show exhibition in 1978 undoubtedly opened the Winter Gardens after a 16-year closure, and saved the museum from being abandoned as ‘unsuitable’. More can be heard here.

From 1949, when a middle class Glasgow parlour of the 19th century was built to show the contrast with a ‘single-end’ or one-roomed house of the kind where thousands of large Glasgow families were raised, the People’s Palace has shown the contrasts between rich and poor.

At opposite ends of the social scale, one of the earliest and most luxurious Glasgow bathrooms was rescued to contrast with a wooden booth from a Model Lodging House, both of which were still in use in the 1980s. A doll’s house Prefab, made to scale as a Christmas present for a child in the 1950s shows both postwar housing options and the great craft skills present in the society of that time.

Social issues, industry and fine art are often combined in some collections. A good example of this is the decorative Fern or Wardian Case, c1880, made by Andrew Brown, instrument maker to Lord Lister at the Royal Infirmary. This was gifted by Brown’s family in the 1950s, together with examples of the carbolic sprays and other instruments which changed the course of medical history. The Royal Copenhagen Porcelain vase exquisitely painted with a rat, and presented to the Glasgow doctor who managed to contain an outbreak of bubonic plague in 1901, is another. 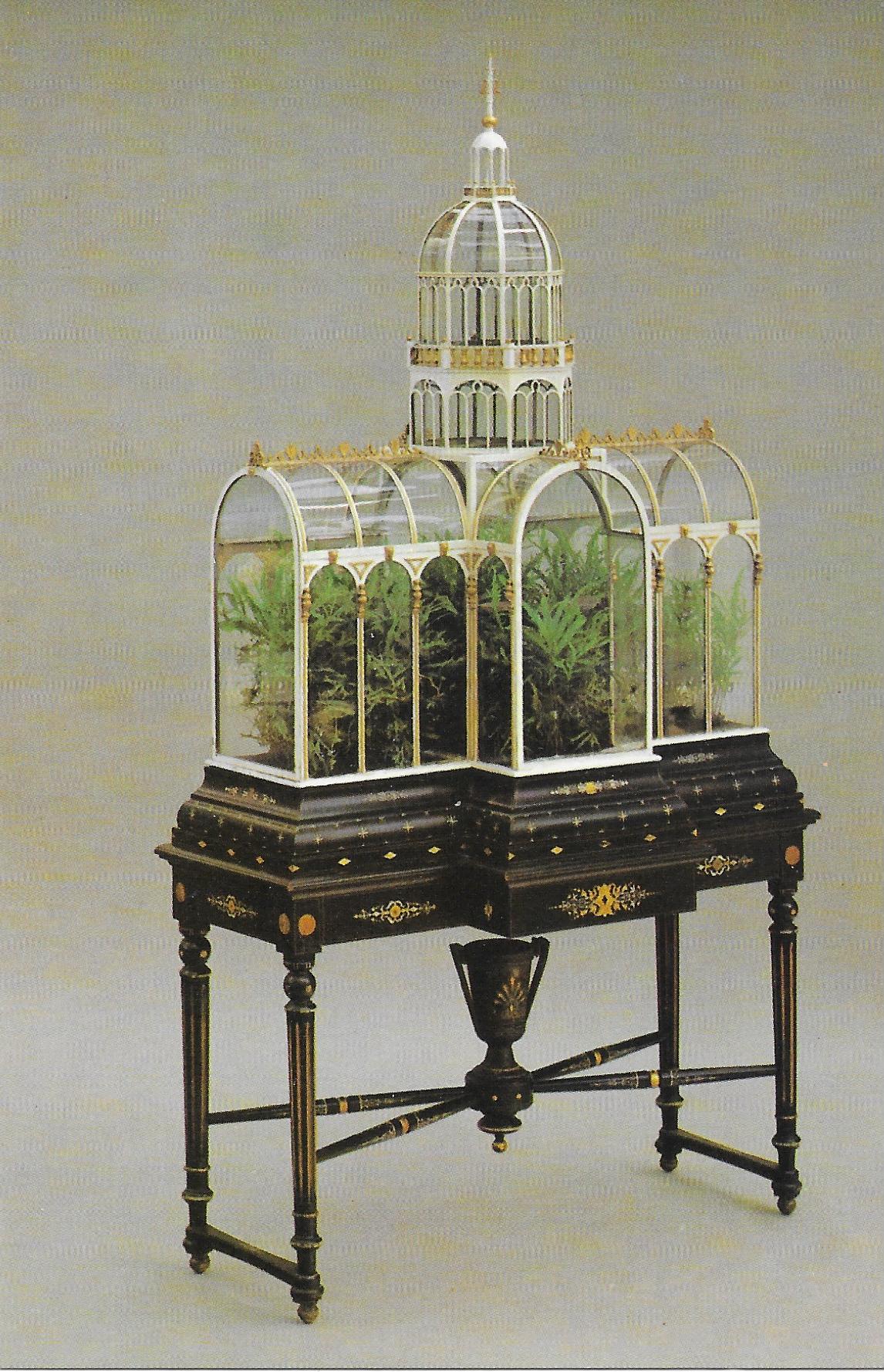 Scotland Sober and Free, an exhibition marking the 150th anniversary of the Temperance movement in 1979 brought in rare collections covering the Band of Hope, Rechabites, Independent Order of Good Templars and material covering temperance organisations from the local to the international, all with a Glasgow base.

Church history is another important and well-represented factor in the Palace collections, from the stool used by John Wesley when he addressed the crowds on Glasgow Green, to the pulpit seat designed by Daniel Cottier (1838-1891) for his iconic Dowanhill Church in 1866.

Glasgow is made up of many communities, some of them former independent Burghs, and all are represented in the People’s Palace. For the detail on the holdings for the Burgh of Govan for example, see article full article on History Scotland.

A loss to the city

Sadly, most of these collections have been locked up in storage for 30 years. One of the worst aspects of the current loss has been the closure and interior destruction of the Winter Gardens. This great glass house, one of the glories of Glasgow, is held in great affection by all who know it and has been a popular venue for weddings, concerts, parties and other events. From 1940-45, it was the only place bananas could be seen in Glasgow.

In 124 years, there have been many repair programmes, but none where the plants and palm trees were ripped out and shredded on site, and the floor lifted. Mercifully, after 3 years and 4 months of closure there is still not a broken pane of glass in this allegedly dangerous building and we look forward to the day when it will be repaired, restored and replanted, as the Council has promised. At present, there are no plans in place.

The Calton area is still one of the poorest areas of the city, and people who cannot afford to travel need the tropical uplift which the Winter Gardens provide.