Messages on our birthday

On Peoples’ Palaces by Hailey Maxwell

As reported by Angus Calder in the London Review of Books 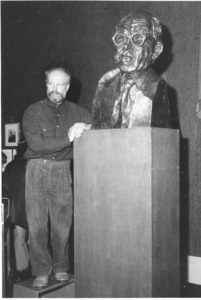 Just seventy years after Friday, 31 January 1919, when troops and tanks stood by to quell a mass rally, in Glasgow’s George Square, of West of Scotland workers campaigning for a forty-hour week, the event was remembered in the People’s Palace, the museum of labour history on Glasgow Green.

A bronze bust of Willie Gallacher by Ian Walters was not so much unveiled as proclaimed. It sits at the top of the building, in the room where Ken Currie’s controversial Rivera-style murals of working-class history can be seen around the ceiling: but the speeches were made in the Winter Garden downstairs, where heavy rain dripping through the glass roof and a chill which gnawed one’s bowels did not dismay the two hundred people who had gathered to honour the man who from 1935 to 1950 was Honourable Member for West Fife (Comm.), and an activist long before that on the Clyde Workers Committee.
Speaker after speaker suggested that the bust was a tribute to countless nameless fighters as much as to Gallacher himself. The tradition of ‘Red Clyde’ was being celebrated, and this was an occasion for stirring songs and warm hearts, not for pedantic historians. Gallacher was one of those who put it about that John Maclean was out of his mind, literally hallucinating, when he ran his Scottish Workers Republican Party in opposition to the infant CPGB. Nevertheless, the name of the great Marxist dominie was repeatedly invoked, and Pat Lally, Glasgow’s Labour Provost, was much applauded when he seemed to promise that the Council would erect a statue to Maclean in George Square. The roll-call of Red Clyde heroes was fondly recited, Labour men, ILPers, CPers, heretics – Wheatley, McShane, Maxton … And why was I there myself if not because I’d read as a boy a book about Maxton and fallen at once under the twin spells of the Red Clyde and of labour history?

The People’s Palace sells a postcard of Maxton. In an election advertisement of 1922, a man with a lovely smile wearing a huge cloth cap is holding up a solemn tot: VOTE FOR MAXTON AND SAVE THE CHILDREN. The image assimilates itself with that of Christ on the Sunday School wall: SUFFER THE LITTLE CHILDREN TO COME UNTO ME. Complex crossovers between religion and politics help to explain why a version of socialism which is sentimental as well as pragmatic still dominates the political map of Strathclyde. Breach of Promise, the title of Clive Ponting’s study of Wilson’s governments of the Sixties, evokes, with its suggestion of sordid betrayal, a polarity which dominates structures of feeling within the Labour Movement. The shades of men like Maclean and Maxton whose failure in politics expressed a refusal to compromise are invoked against ‘traitors’ like MacDonald and Jenkins and wheeler-dealers such as Wilson. In particular, the highly intelligent Scottish politicians now so prominent on Labour’s Front Bench have to live with the oral history of folksong, and with comparison in young minds with Harry McShane, that Marxist saint who fought beside Maclean and died only recently, and with Mick McGahey, happily still with us, beaming serenely at the back of mat throng in the People’s Palace.