Peoples Palace – “For ever and ever” Architect

People are asking ‘Why is 22 January Gray Day on Glasgow Green?’ and ‘What connection had Alasdair Gray with the People’s Palace and Winter Gardens?’

44 years ago on 22 January 1978, Alasdair Gray’s Continuous Glasgow Show, with 30 new paintings of contemporary Glasgow people and places, opened to the public. Alasdair had worked on the staff here for many months, as part of a Jobs Creation team, paid for by central government and managed by the Glasgow Eastern Area Renewal scheme (GEAR). Glasgow District Council was of the opinion that the People’s Palace was not fit for purpose, “an unsuitable building in a bad area”. The official Planning Department East End Listed Buildings Survey Report, 1977 said of the building that it was

“Not Programmed. Museums Department envisage at least another 5-10 years use out of the building although it could be closed sooner by the Firemaster because of inadequate means of escape and no money to carry out precautions. Might become redundant sooner if Fish Market procured for museum purposes. Could possibly be used for community facilities”.

Furthermore, the Winter Gardens had been closed pending demolition in 1966. This had been held at bay by the work of Robert Wilkie, Curator of the People’s Palace 1965-1974, but the gardens remained firmly shut.

As the People’s Palace had had no modern paintings since 1898, Alasdair Gray worked on providing a series of paintings to portray Glasgow in 1977. It should be known that his wages and materials were not financed or otherwise supported by Glasgow Museums, yet Alasdair produced a body of work which any city gallery in Europe would have been proud to own. Politics has always been important here, and he chose his politicians carefully:

The arts in Glasgow were expanding at that time, and Alasdair did a rapidograph drawing of the Third Eye Centre which had opened in Sauchiehall Street as an Arts Centre in 1974. There are five portraits in this one work, and to get them all in, he took away the outside wall to show a view into Sauchiehall Street. The drawing is also a guide to contemporary office equipment with dictaphone, typewriter and adding machine.

Glasgow was becoming known for its writers, and Alasdair produced portraits of Archie Hind, the poet Alex Scott (in the Pewter Pot Pub with his wife, a bartender and two customers), the poet Liz Lochhead in her living room, overlooking the River Kelvin and the University, Jim Kelman, Professor Edwin Morgan, and Tom Leonard with his family.

The portrait of Reo Stakis, set in a collage of his 22 Scottish hotel brochures, represented the business community, and when the Grosvenor Hotel burned down on 7 January, Alasdair de-framed his picture to paint flames coming out of the hotel window on the brochure. This was shortly before the exhibition was to open. We lived in exciting times.

It was an era of comprehensive redevelopment in the East End, and this is well reflected in Alasdair’s paintings of the End of Arcadia Street and Alasdair’s favourite East End local, the Monaco Bar.

Religion featured too, and Alasdair depicted Pastor Jack Glass with the statue of John Knox in the Necropolis, as well as his Catholic counterpart, Canon Collins of Pollokshaws.

Journalists were well represented. Alasdair went out with Norman Ross for one of his Radio Clyde Hospital Broadcasts, always characterised on the airwaves by the cries of ‘Hello, Norman!’ by children of various different ages. Fidelma Cook, who died only last year was painted with her colleagues in the BBC Studios, Queen Margaret Drive.

My favourite painting was one he did of one of our job creation teenagers, Frances Gordon, in her platform soles and flared trousers. Alasdair wanted a record of a typical Glasgow teenager, so when the painting was finished, he got her to empty her handbag of keepsakes, including a ticket for an Elton John show at the Apollo, disco tickets, a ticket for James Barclay’s play, ‘The Bigot’ which filled the Pavilion Theatre for many seasons.

In short, Alasdair’s 30 pictures were a Glasgow time capsule and the exhibition attracted widespread publicity. The most astonishing scenario was the opening, 22 January, 44 years ago, when over 100 people came through miserable cold and ice to the exhibition opening. The Winter Gardens were opened for the first time since 1966, to welcome them all.

Regularly, those who ran Glasgow Museums claimed that there were no visitors to Glasgow Green, nobody would ever use a café in the People’s Palace and that the building had no future. Alasdair Gray’s exhibition proved them wrong, and that’s why we count 22 January as Gray Day on the Green. 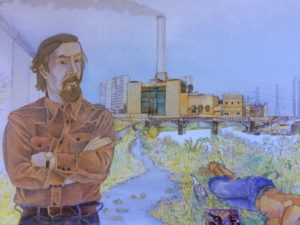 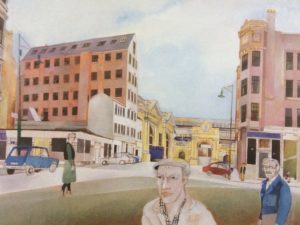 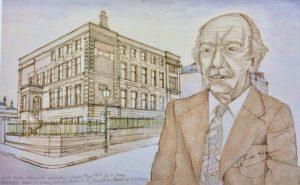 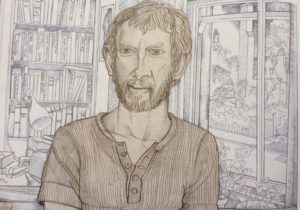 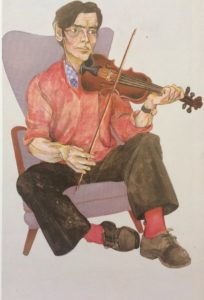 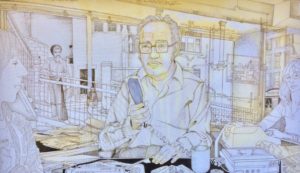 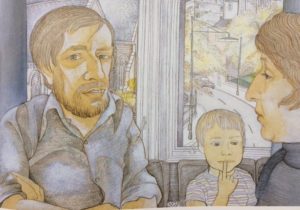