B side of the Peoples Palace Song – Billy Connolly Song

The Rutherglen St Eloi to appear for Landemer Day 2022

Glasgow Life has agreed to lend the copy of the Rutherglen St Eloi statue, made for the People’s Palace displays in 1975. The piece has an important story to tell, not just for Rutherglen, but …

Thursday 14th April at 7:00pm. Calton Heritage & Learning Centre, 423 London Road G40 1AG Your chance to hear what the candidates have to say and to  ask questions about the future of our local …

Birthday wishes for the People’s Palace and Winter Gardens

The 124th birthday of the People’s Palace and Winter Gardens (first opened by Lord Rosebery 22 January 1898) was celebrated with style, even although the building has been closed for three years.

Tribute was paid to the artist and writer Alasdair Gray (1934-2019), whose Continuous Glasgow Show exhibition of 30 new paintings of Glasgow people and places, prised the doors of the Winter Gardens open again on 22 January 1978 after a 12 year closure. We proclaimed 22 January to be Gray Day in honour of Alasdair’s service to Glasgow and the People’s Palace and Winter Gardens.

Guests were invited to bring along birthday cards with messages for Glasgow City Council. Some of the cards were left on the fence around the building. A selection of the cards are shown here. We will send a link of this piece to Glasgow City Councillors and employees involved in the curation and care of the People’s Palace, Winter Gardens and Glasgow Green so that the love and good wishes are shared. 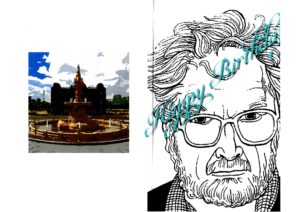 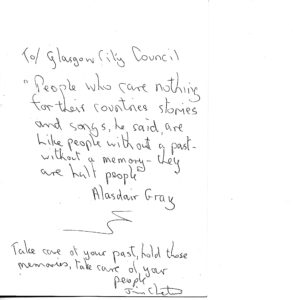 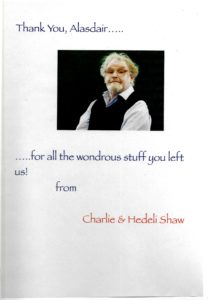 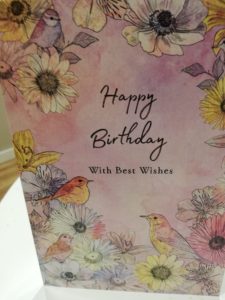 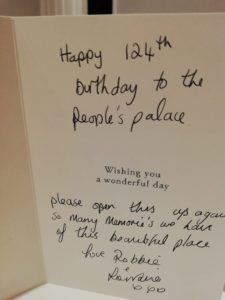 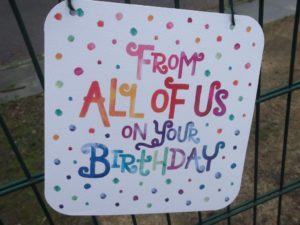 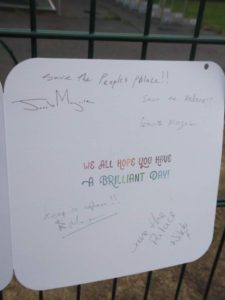 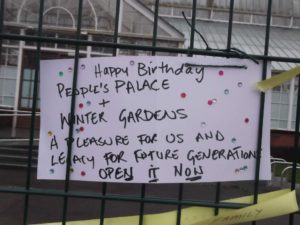 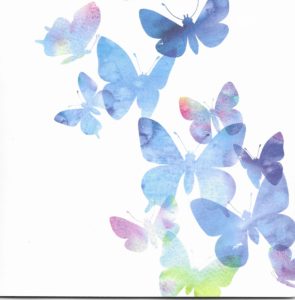 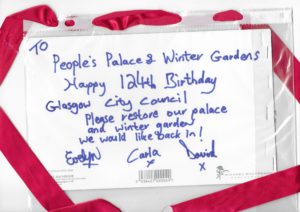 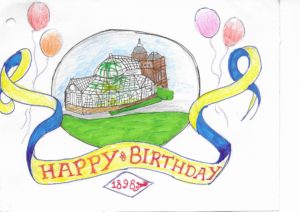 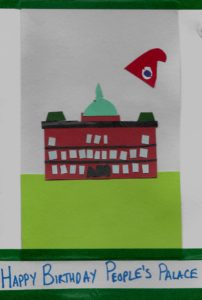 Peoples Palace – A member of the public speaks. Why?

Peoples Palace – “For ever and ever” Architect

People are asking ‘Why is 22 January Gray Day on Glasgow Green?’ and ‘What connection had Alasdair Gray with the People’s Palace and Winter Gardens?’

44 years ago on 22 January 1978, Alasdair Gray’s Continuous Glasgow Show, with 30 new paintings of contemporary Glasgow people and places, opened to the public. Alasdair had worked on the staff here for many months, as part of a Jobs Creation team, paid for by central government and managed by the Glasgow Eastern Area Renewal scheme (GEAR). Glasgow District Council was of the opinion that the People’s Palace was not fit for purpose, “an unsuitable building in a bad area”. The official Planning Department East End Listed Buildings Survey Report, 1977 said of the building that it was END_OF_DOCUMENT_TOKEN_TO_BE_REPLACED 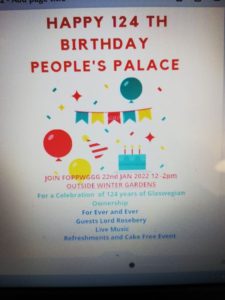 124th Birthday Celebrations for the People’s Palace on Glasgow Green

You are invited to join us at 12noon -2:00pm on Saturday 22nd January 2022 outside the People’s Palace for its 124th birthday as we celebrate the anniversary of its opening  “for ever and ever” by Lord Rosebery, 22 January 1898.

Last year we had a musical celebration in the sunshine. In 2020, we celebrated inside the museum with songs and a birthday cake. In 2019, the celebration was in West on the Green, as the Palace was closed as dangerous and in need of repair. Covid has kept it closed for most of the time since.

This year we will tie a giant yellow protest ribbon round the building. It hugs our neglected social history collection and utterly destroyed Winter Gardens. The ribbon represents drawings that shows our anger against Glasgow Life and Glasgow City Council. It affirms that the building and its collections belongs to the people of Glasgow and that those in power must take bold action to restore it to us.  It is not for sale, not for reimagining and not for repurposing.  The yellow protest ribbon represents our immediate demands that they open the doors for full access now.

There will also be music, freebies and stories. We would also like you to bring along a birthday card with a message to Glasgow Life and the Council which we will send on to them on your behalf.

We are determined to see the building repaired, renewed and restored so future generations can both enjoy it and immerse themselves in the history and culture of Glasgow as well as basking in the healing warmth of the Winter Gardens.

Alasdair Gray, the artist and writer (1934-2019), was a great supporter of the People’s Palace and this will also be our first Gray Day in his honour. His exhibition The Continuous Glasgow Show, 22 January – 1 June 1978 opened the Winter Gardens to the public for the first time since closure for demolition in 1966.

For information on Alasdair Gray and the People’s Palace see his Life in Pictures, chapter 14 (Canongate 2010) 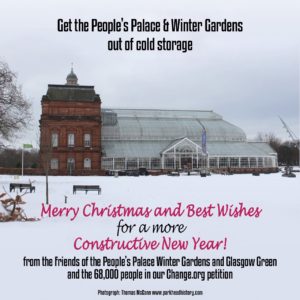 Our Christmas card to Glasgow City Councillors to let them know that our campaign will continue into 2022 until the People’s Palace and Winter Gardens are restored and re-opened for everyone to enjoy.

See this wonderful episode Winston’s wedding in the Winter Gardens 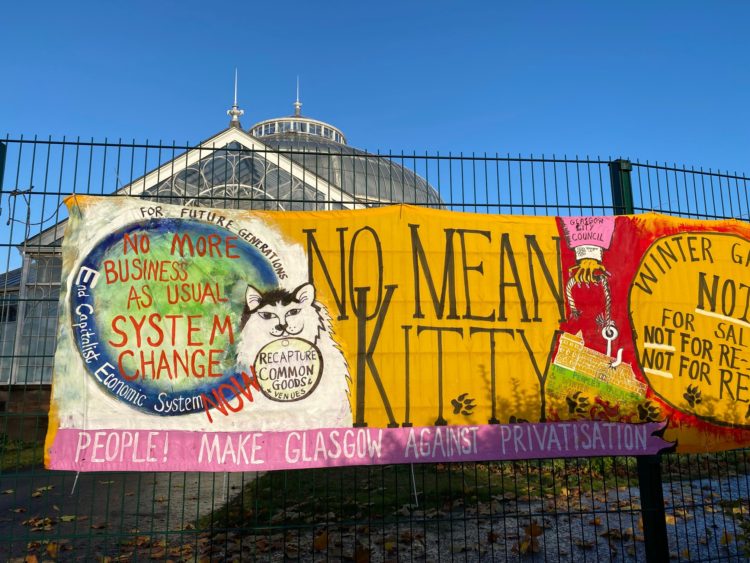 The 200metres of yellow wrap makes it the biggest and most comprehensive artistic response known, to the closure of a museum anywhere! END_OF_DOCUMENT_TOKEN_TO_BE_REPLACED

Save The People’s Palace and Winter Gardens! Located on Glasgow Green, Scotland is a museum and glasshouse which was opened on 22nd January 1898 by the Earl of Rosebury.  At the time, the East End of Glasgow was one of the most unhealthy and overcrowded parts of the city, and the People’s Palace was intended to provide a cultural centre for the people,  It was designed by the City Engineer, Alexander B. McDonald.  At the opening ceremony Lord Rosebury stated ” A palace of pleasure and imagination around which the people may place their affections and which may give them a home on which their memory may rest”.  He declared the building “Open to the people for ever and ever”. END_OF_DOCUMENT_TOKEN_TO_BE_REPLACED